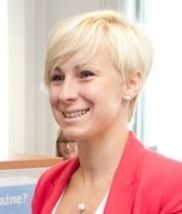 Kasia joined MetLife in July 2010 as a Personnel & Payroll Specialist and in June 2013 was promoted into her HR Operations Manager role. She was managing the HR Shared Services team in Poland as well as the ADP outsourced payroll vendor team. Kasia and her team were responsible for the HR Shared Services processes, payroll, benefits, HR administration and reporting for the four Polish entities as well as supporting the Baltic countries. From 1st of September Katarzyna took new role of Sub-Regional HR Operations Manager for ESE .

Kasia started her professional career back in 2001 as a receptionist in Volvo Trucks Poland. In 2004 she started to build her experience within HR. Volvo gave her opportunity to  experience a HR redefinition project and gain experience as an HR generalist and her roles at MetLife have allowed her to grow and develop that initial skill set.

Kasia holds a master degree in economics and lives in Warsaw with her family.